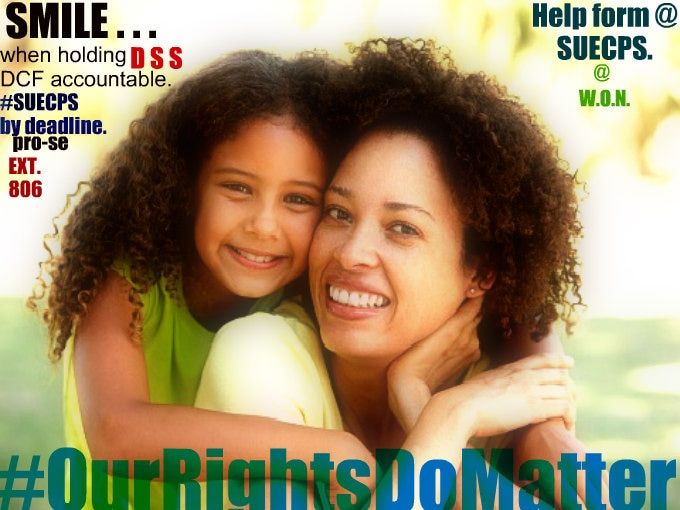 NY caseworkers in have violated so many rights of a Good American Family,and so many violations involving everything from :

>Child injured once removed from home by a DSS employee, left to rot deteriorate, RAPE,
sex abuse, to become malnourish
in state supervision and "care."

>Fraud on the court.

​>Lying on a the new spouse who clearly did not harm his wife children.

>Altering Records/Fabrication of such documentation et.al., leading to a wrongful unlawful seizure, and the continual removal of a child,
from her or his home, in violation of one's right. Proving once again, when you're not sitting online,bemoaning on CPS employees, but applying timely-by-deadline strategic ACTION to sue, you're doing what is necessary when you and your beautiful children and or grandchildren have been horribly mistreated... Be proud of yourself and we shall discuss with you at length, more when you're calling in and when you're suing on your own pro-se CPS by deadline timely... EXT. 920

So good to see that ANOTHER have won @ Summary Judgement to see their suit for damages, to be determine by a jury of their peers. (Read below for end result) #settlementagainstdssnyc


Another lawsuit for damages CPS-related case our busy trained pro-se expertise team @ WON has been following, another lawsuit that has been won...Such injured party and her entire family sued and held CPS accountable. Such worker lied, falsified,pertaining to the  nature of the child's removal from such parents, falsely accused. The record reflect exactly what has happened to many others, but sadly some still are not suing... DON'T wait til you are missing a deadline to sue.  With a lawyer, OR without a lawyer, you're clearly within your right to be exercised to sue the abhorrent caseworker,social workers, DSS, employees who have violated your rights, and grandchild/child, when you're being violated. #DEADLINES THROUGHOUT DO EXIST. GOOD LUCK TO YOU...READ MORE BELOW! EXT. 806

Another in New York where 2 parents falsely accused sued for damages and have won SUMMARY JUDGEMENT leading to such (settlement followed a month or two later.)
​

The parents, in NYC had sued, claiming the defendants are liable pursuant to 42 U.S.C. 1983 violations of both parents rights,pursuant to the 4th amendment, and the child.

Shall be discussed more, during your weekend, weekday session everyone 1-on-1. Be sure if you have not done so,fill out such help form, prior to calling in.

You're to utilize E-HELP FORM and the help/hotline directly for your 1-on-1 session to begin your pro-se self file consulting
-
1-on-1 educational session.

Plaintiffs also allege in their papers that, if lawsuit is blessed to move forward, they are able to prove that at the minimum (2)  or more persons had conspired to keep things from the court, that would have (if known)affected such case in a more positive light for the plaintiffs,and exhibit the workers for DSS,ACS were conspiring to violate both parents rights at various times throughout the now-closed family court case involving their child.(Such claim for a conspired act,pursuant to Section 1983, U.S.C.,Title 42.

The parents won suit against such agency.
-
The judge, in  transcript procured, by our W.O.N.E-lawstudent winning powerhouse women network show what has transpired throughout, where the judge has allowed the unreasonable seizure (4th amendment claim for damages associated with their child's removal to stand.)

"Such decision @ summary judgement is based on the fact that the state worker(s)across the nation,are being held accountable, as judge clearly cites,and their other sister-courts (Federal) et.al., have adjudicated analogous.

"I am granting it on the issue of such seizure/4th amendment violation and now, it will be left up, to a jury as to $ liability, and up to a jury to determine the amount of damages owed based on the 4th amendment violation, the child's seizure for a lengthy 2 years, where the parents only were able to visit with their biological child less than a handful of times, in violation of their right. Such caseworkers, (DSS) employees in NY made sure the parents had limited to no contact with their own child, in violation of their right. The judge was clear on such law surrounding our 4TH AMENDMENT/14th, when it comes to interference and or the "continued-interference of a government CPS employee, and it is clear everyone why this suit was later settled a month or two after winning @ Summary Judgement."A jury would've learned that:
3 out of the five caseworker's sued  have either:

-Lied under oath, Lied on the child's condition during such stay under DSS supervision and care.

​-Perjury to material fact throughout, involving mom and her spouse in order to keep the child that much longer away from the mom.

-Falsified a document pertaining to her child,by a social worker @ DSS in NY

and failed to adhere to policy when removing a child from the home, where there was absolutely no legal basis to do so.

A "reasonable officer" in the same position, says the  JUDGE, would have known not to act, in such manner the 3 out of five DSS employees have. A JURY would've been able to conclude such. This case is quite analogous to our boss/founder Melendez and her daughter's suit, that is in the news public,where you're able everyone, to validate and read on our popular facebook support site,and here at our popular site,and in the news.
EXT. 806
​
In the current case we are discussing today in NYC against DSS:
The school board were also sued,but were dismissed from the suit early on..


The County also was dismissed @ Summary Judgement(improperly pled) however, parent won the right to re-file!(against the county) premise on it was dismissed without prejudice.

CONGRATS TO THIS FAMILY WHO, DID NOT "sit online bemoaning about the "issues with DSS, but are true champions like our founder and her family at WON LAW-STUDENT RESEARCH SPECIALIST CONSULTING POWERHOUSE WOMEN #WINNING NETWORK" THE OWNER DIRECT EXT. is 806.