Not to be illegally adopted by a stranger
when i have a good parent at home, loving grandparents."
​
​ Ext. 806

Filed in the U.S.District(Federal Court, 3rd Cir; NJ.DE.,PA.,owner filed her lawsuit. Media news validate her winning the right to her suit to move forward, as her injured girls,the family." over 118+ lawyers said,"can't be done."  She has proven them all wrong, and did so all within deadline when you're being so badly violated by CPS employees." Read more below...Ext.806
​
Melendez knew on the 4th of july weekend: 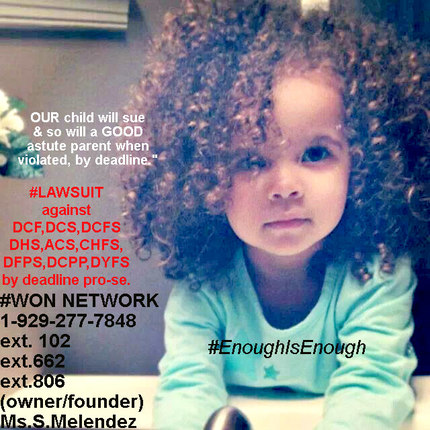 During a July 4th weekend, both girls packed their pink barbie bags, a happy meal/bk and were driving to the father's residence for a typical routine weekend visit.

The girls were healthy, alert, not bruised,not hurt at all, on or about  4th of july weekend several summer's ago, when shockingly 2 little girls simply vanished.

The daughter's of the owner was visiting the father,kevin during a court ordered visit. He did NOT have custody ever.

The girls were due back Sunday on July 6th, sunday by 7:p.m. via court order to return home."

The nightmare only worsened, for which had change both their lives as mom forever."

Myth as told under oath/and or in sworn-in affidavit to court:
​

It is quite ubiquitous, whether here in NYC,NJ DE.PA tri-state to Indiana,Minneapolis,Michigan,Ohio,Virginia,NC a dss worker will incontrovertibly lie to seize your child, for which has prompted more lawsuits skyrocketing in the past few years and we are happy to see this finally take place nationwide." Such myth is what happened in the distorted,nefarious brain of a state employee @ dcpp,dcf for which has no truth to it whatsoever, but it worked for the time being, for years for dyfs, who allowed during such time this farce to injure 3 people for  far too long, until SUED ...

-
DYFS,DCPP who knowingly lied(keep this in back of your mind, when you're learning and realizing what happen to the owner as her suit fully support as experts agree CPS clearly violated the owner and her girls most inherent rights.
DCF falsehood...
CPS Myth:

The girls are at imminent risk of their health judge, so we have to protect "Gia + Tia,they are both at serious risk." THESE GIRLS CANNOT GO HOME. CPS has substantiated judge,so the girls can't ever return home to such parent."

A box containing and known as the 'smoking-gun located by a determined good innocent parent, the box later
found, in a stuffy  DYFS(dcpp)agency office, years after the illegal abduction by CPS. Had her name on it."
Such box shockingly as media also verified contained but not limited to:

There was no risk, no abuse,no neglect,and no imminent danger on the day in question,and more than five employees knew it."

This was known to  caseworker-supervisor Carlos Novoa,defendant in suit, another defendant Sebastian Antony, who knew actually since the 1st day of their unlawful illegal seizure in violation of the girl's fourth (4th/14th amendment) rights along with other worker's Gloria Cameron aka Gloria Walton +  other employees #dcpp dcf.

Caseworker had already prior cleared mom, along with lauding her for being so "well spoken educated,
and lovely woman and how she was not able to prove any abuse at all from an "anonymous false allegation."


ALL relevant informatin by C.P.S. employee(s)at the time assigned hinder such files."


At this time, during cps burying the truth that would have allowed mom and girls to continue to be happy under 1 roof, the state employee who is liable for such,as others buried their sanity, their youth, their time with the only parent who has raised them, nurture, and loved them since in the womb.
​
Ext.806


​All of these state employees despite knowing their own protocol, policies et.al, chose to hinder hence violated family right."


​
ACCOUNTABILITY finally after a decade became visible when suit was filed timely and (the right way) by such family pro-se level without a lawyer when so many lawyers lied by citing it just can't be done. She knew better."

1-929-277-7848 ext. 806 Law school is now her focus in California, to NC,NY,DE.,PA.,to NJ as she has studied for almost 15 years without slow down and has become an expert insofar as when suing (the right way)timely by deadline against CPS.

Key facts supporting owner's win at such level are 1-on-1 discussed as  publicly verified in her suit and news media.
​

When you're learning everyone at "that moment" your child has been legally kidnapped by cps, do not wait until your deadline."

Begin to learn and don't stop learning as much as you can and sue cps pro-se, before time run out to do so. Times are finally changing,and it is a beautiful thing to see so many learning nationally, and no longer relying on a OSA(old school attorney) who is indolent,non-astute and or uncaring,that he will not sue or represent you. Ms.Melendez did hers the right way(key word is the right way)but focus and clear determination when seriously injured as she was for 8 years along with her daughter's. No lawyer.


Hence, inspiration for all who are suing cps by deadline, pro-se. We wish you the same results as the owner and her family has procured. God is good. ext. 102


#GodBlessOurFamilies from the violations of a state employee and may god be with you, this fourth of july holiday and each holiday and days nights with the
MOST beautiful part of your life...

Your child.
Your grandchild.
YOUR FAMILY.

#CHOICE IS YOURS
Either sue cps or remain violated is all up to you,

and for those who are prudent to sue timely by deadline like our owner?
We,at the WON E-LAWSTUDENT EXPERTISE commend you.
ext. 102