Action is where it's at when violated by child protection worker who undermine the bond between yourself, your child, your family. Nothing else will do. ext. 806


Former workers @ such agency even concede such fact to our owner many times after seeing her amazing victory on the internet,have admit this to her one-by-one.

Such agency shall continue ergo,to violate as"long as your not doing anything about it"because the workers at DCPP,CPS just do not CARE, as simple as that so you care,and begin the process today on your lawsuit within time allowing you to do so. Pro-se. (If no lawyer care enough to represent you.) Ext. 806 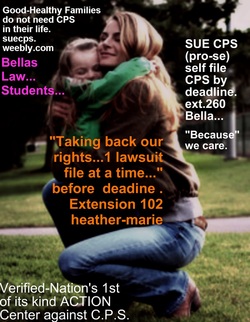 Suburban loving GOOD astute doting parent has refuse to give up,took almost a decade but she got to where she needed to be,in the U.S.District Federal Court,whose doing what was needed for years...But she had no "lawyer"to put her on this amazing/right track to HER FINAL JUSTICE ext. 260(founder/owner direct extension


Parent just simply applied her astute mind,prudent prowess,ingenuity and her overall free hours per day to see to it she"learn the law"inside out/study per judge on the case during almost 8 yrs.keep notes,take the time to drive and go interview lawyers,or via phone in totality HUNDRED x 3= over 300 lawyers from down south,for federal civil right violation(s)suit, to here in NYC,NJ tri-state to PA.,to CALI,she has called verified-publicly known so many as she call them a 'indolent bunch of lawyers'uncaring,who feign to care but RUN as soon as you mention C.P.S. most times, and or make up thousand of excuses"as to why" you can't sue CPS.  OUR OWNER, MS.MELENDEZ  DISMISSED it all,and her girls and her are now better for it, and the nation, premise on she then launch during such heartache/hard time and sadness, launched the 1st Chat Video-Chat LIVE phone-in network, effectively for those who are suffering just like her,but ready to sue pro-se as she has astutely proven is feasible against a child protection services caseworker. Ext. (806)

Foster(former kids)somewhere today have NO IDEA,one shall and can sue for money damages,per civil right violation directly against the caseworker.supervisory'managerial staff at new york ACS,NJ DYFS,CALI DCFS.
Not until meeting/interviewing with Bellas Law Students and we welcome ALL of their calls regularly ext.102
.
OUR FOUNDER MS. MELENDEZ...SHALL  CONTINUE TO SERVE AS A BLUEPRINT per video consult,phone-in consult for those who are ready to sue finally... by deadline CPS (pro-se self file...)


"Never sign ANYTHING she used to say
because"then CPS has you"where they want..."
-
Your belonging technically as OUR FOUNDER MS.MELENDEZ,
told media again recently,"you then you technically have given such abhorrent despicable caseworker her power to control you and sadly,your once happy beloved child.(if you did sign papers,speak to ext. 806 our virtual office-online staff 1-on-1 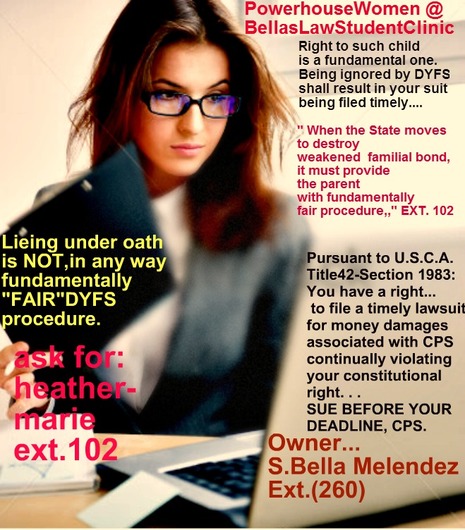 "To do nothing
but complain
and whimper is not "progress.

The Time is Always Right, to do what is right. M L K JR.


Owner has proven you can sue and win against CPS ext.806
Ms.Melendez, took DCPP,DYFS,DCF to the U.S.District Federal court,within time allotted by law as her girls..." 1-929-277-7848 Help Form, CLICK HERE."
---
Inspiration for all whose been where she was, and we commend you all who are as her, filing your suit timely by deadline by holding CPS worker accountable,when proceeding to do so,timely..." Ext. 806