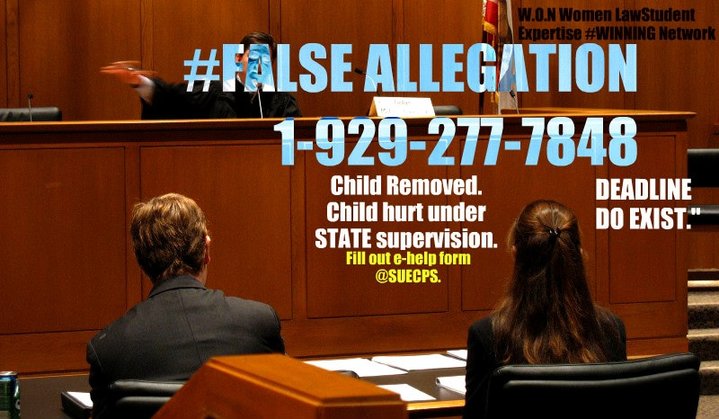 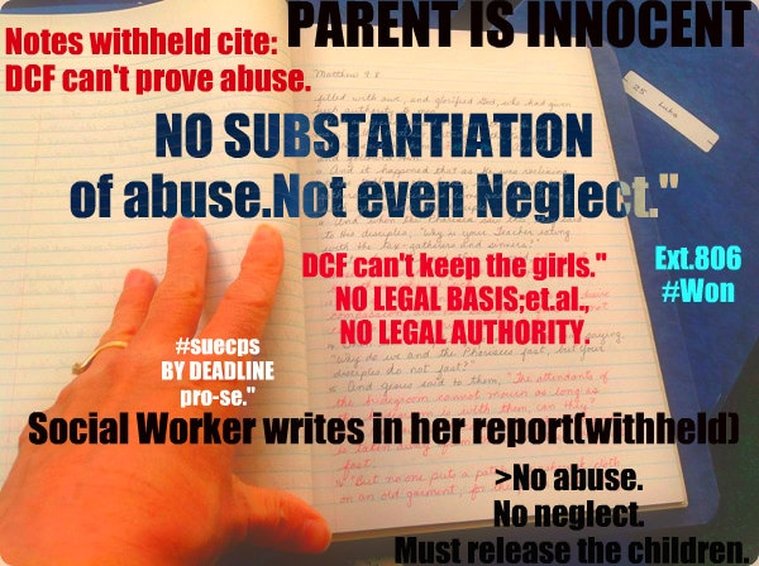 The outcome,  after caseworker left mom's house and after the caseworker's at DCF clears mother,is what is not reasonable, as experts agree nor from the inception JULY 3rd for 2 weeks the children were seized illegally at "'grandma's, shall be discussed more below.


The caseworker heads back to her office, and implements her report, of such findings involving the DCF investigation.

DCF employees all agree, "No abuse against mom can be proven,substantiated, of neglect or abuse." The daughter's can go home.

The report cites, "There even was a medical report, proving the daughter's were fine, and not at any imminent risk of harm, no serious injuries, and clearly the girls were alert,happy et.al.,

The report from DCF in furtherance cite, how mom, is lovely/well-spoken young woman and how the children, at the grandmother's house, are allowed to go home, and how DCF is going to "contact the PGM, to advise her no abuse can be substantiated." [End Quote]

Child, now of age, is able to sue for per civil right damages associated with her 4th amendment,14th amendment constitutional right; and various other claims, in which she is entitled to.

What makes this case unique as experts agree worldwide is a few relevant factors when you're suing a state agency/government employee everyone and that is, the evidence shall speak, at trial for itself.
I.E., but not limited to;

1.)The caseworker assigned,and or plural"caseworker's" were acting "at all times from JULY 3rd, the day of her illegal seizure, what is known as "good faith."

This, shall be proven that there was flagrantly no act of "Good faith." Not in this case. Not at all, everyone. The actions of the social worker's (more than needed)able to prove the complete antihesis, insofar as from the actual day in question, week in question, and up to "2"weeks without a court order judicial authorization a warrant, when it was clearly known incontrovertibly the girls'were:

>Happy.
>HEALTHY(police validate and dyfs workers)
>Alert.
Police validate such fact(s) everyone.
Dr..who was at the time reportedly with the children and examine both girls(as cited in a report withheld by a social worker state gov employee,who knew the girls were not harmed and or at imminent risk.)

1 by 1, each defendant being sued, the "main parties liable" all knew that at such time of the child seizure from their own home, that the mother did not harm her child,can't be proven and there was no substantiation of abuse, not even neglect. 1 by 1 the social workers hid such truthfulness. There is no"Good faith, when doing so, as experts cite clearly for years." The other report withheld knowingly, willfully by such worker(s) were memorialized and cited "Based on our investigation at DYFS,DCF the caseworker's can't prove abuse or neglect against the parent,the mother. Such report was later discovered, in a box with the plaintiff's mother name on it, sadly, it was several years "after." By then the damage, has been done for years."

>Not withholding such relevant information pertaining to a little girl being healthy, alert,happy and not at staid risk and has a legal right to return home.
>Not lying (knowingly)engaging in perjury insofar as what transpired during DYFS investigation.
>Not advising the police "No abuse assault et.al., against the parent, but then turning around and going along with others, to conspire to deprive a mom her children and the children their loving parent,who you're well aware is innocent as you're memorializing in such highly-significant reports, as a state government worker for such public entity.

JURY SHALL HEAR THE FACTS.
JURY SHALL SEE WHAT HAPPENED EXPERTS AGREE WORLDWIDE."

-
The state defendant or "defendant's" shall have to prove, that all of the aforesaid everyone, was done in "Good faith."

That it was actually "objectively reasonable" to:

1.)SEIZE two little girls, in violation of one's 4th amendment right to be free from unreasonble seizure/search et.al., when a healthy perfect little girl happy alert in school was not at risk.

2.)Lie on the child's mother, withheld exculpatory evidence; alteration of evidence;malfeasance from the outset, rather than allowing as by law, as the report cite, allowing the girls to go home, since after all there was absolutely NO ABUSE/NO NEGLECT/NO SERIOUS INJURIES/NO IMMINENT DANGER that would have prevented the girls from going back to their house to live with their loving parent.

3.) State agency employees would have to prove it was objectively reasonable that a worker and a supervisor,as others were conspiring to deprive a child her right as the parent premise on abuse "not being substantiated,but to alter a document,and or withholding such exculpatory evidence, of the parent innocence, to make it appear that imminent danger did exist for the 2 weeks the state agency kept the girls out of their own home, without the necessary required warrant/and or judicial authorization, and for the following eight years while the girls had suffered untold damages, unspeakable abuse,and SEVERE abuse ongoing, per year and severe neglect.

PLAINTIFF SHALL BE ABLE TO PROVE AT JURY TRIAL:
NONE OF THIS WAS REASONABLE ACT(s)on behalf of a caseworker who is clearly:
>Trained at time of said violation.
>Acclimated with what is abuse and what is not. What is a "substantiated indicator/incident and what is not."

​It simply was not  reasonable, nor would any reasonable officer/agent/public official state employee to say, "Abuse can't be substantiated." No  LEGAL reason to keep the daughter's from going back home, as this is not in any way objectively reasonable, when you, the agency employees knew at the time, that the little girls were not at imminent danger,risk and you are writing such in your own investigatory/DCF notes, internal cps reports,and investigation from the outset was clear. The children had a legal right to return home weekend of july 3rd.
​Experts agree:

​That it was not objectively reasonable for defendants to believe that the removal of the plaintiff(the founder's girls) was necessary to protect the daughter's from such imminent, immediate danger. The premise for such jury to conclude such when looking at fact invoked, are as follows:

1.) The child did not see a dr.(and or not for over 24 hours) from the time she was dropped off by mom, for her court-ordered weekend holiday visit over "grandmother."


2.)Child, at the time also was not seen by a police dept. until 12 hours "after" mom dropped her girls' off to see the grandmother.

3.)  DCF official/employee Hansy(defendant) already has cleared mom, by citing such to the policemen as the cops and DYFS both agreed, on JULY 3rd, (evening hours)there was no abuse/no neglect, no medical attention required, the child was fine, alert, and at no serious risk whatsoever.

4.)Child then was at the grandmother house for the weekend holiday from Thur. July 3rd, throughout Sunday July 6th, hence, the court could have adhere to law, and simply call the prosecutor/and or a judge available,and or police dept., to procure the necessary warrant to remove the children, and or judicial authorization, within the time the children were for "several days over grandmother's residence, to take them into state custody,since it is clear premise on such facts, not assertions but facts, the child was not at imminent risk of danger at such time.

Even taking it further, in such case, you then have a second week now starting from  July 7th, to where, again,
what is the state employees, DCF worker's excuse for such removal of the child again without a court order,or warrant.

Such child again was

1.)ALERT as documented by multiple caseworker's and others at DCF.
2.Both little girls were happy as documented by caseworker's at DCF.
3.)Child was just fine during investigation and this was incontrovertibly known to DEPARTMENT CHILDREN AND FAMILIES.
-
DCF employee cites to the policemen:
No abuse.
No neglect.
No need to go see the mother.

NOTE:
If there is an allegation of abuse/neglect, you're to interview everyone. This naturally shall include the mother/father/family.
The caseworker, after meeting the police, did not go see the mom because there was no abuse, no imminent danger, no risk.
The caseworker failed to go see mom. No need. No child abuse/no imminent danger.No neglect as cited by multi- DCF employees.

The supervisor at the time, told (as documented)and JURY shall see such evidence, had informed the caseworker, "That's fine." You can go home now. The caseworker literally adhered and left the police station to go home.

Proof again... (to a jury)and any astute judge, this right here prove there was no imminent danger, and the children were not at risk.Not at all.


The 2nd week arrives:
Child still not home with mom/nor was mother even spoken to.
Both girls trapped,seize in a house that were not their own.

Took, to remind all of our viewers and supporters, the jury shall see that the daughter's were deprive their constitutional right to go home to their mother for exactly/almost 2 full weeks. [A clear deprivation/violation as experts agree] DCF knowingly from the outset, mis-handled such case. This will be made clear to a jury.

Such experts coast-to-coast agree, "It was not, at any time "objectively reasonable" premise on the aforesaid, and we have confidence the Federal Court shall continue to do what is right.

A JURY can conclude, when reading such and viewing and hearing the injured plaintiff's, it simply was not at any time objectively reasonable. Stay tuned to our many worldwide supporters, as we shall keep you posted, as our rights do matter...
Ext. 806