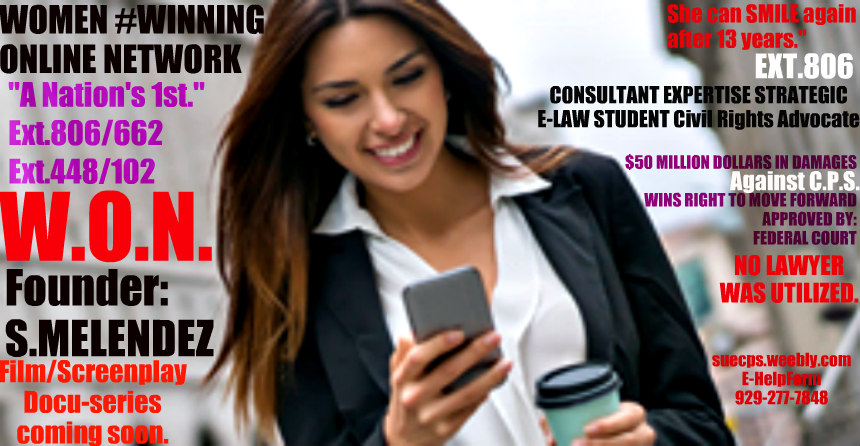 When a social worker is not properly collecting such relevant evidence to assist her/him insofar as:


When a lawsuit was filed against 12+defendants now on the hook for civil right damages of a suburban mother, our founder/leader, law student, S.Melendez, ext. 806 as news media cite:

Caseworkers all knew for years on end the mother was innocent and we quote from withheld documentation, such a LOVELY EDUCATED WOMAN, living in a nice 1 family split level house with a pool,in back ,room for the girls,and mom and a great quiet residential area etc. al., and how the  state employee several simply cannot prove, any abuse and or neglect as the anonymous' caller said on dyfs,dcpp,dcf hotline.." When you're realizing everyone to our MANY weekly followers/supporters you're violated, DEADLINE however does exist to sue. Owner MELENDEZ WAS NOT GOING TO MISS HER DEADLINE EVEN
AFTER 118 lawyers LIED said she can't sue a state worker, she knew better. FILED  &  WON. Inspiration for all truly violated."
ANOTHER LAWSUIT WON FOR  $4,000,000 as read in furtherance below against DCFS... The child, injured now an adult early 20s, won 4 MILLION for damages caused by D.C.F.S failure to protect and other various numerous claim(s) and we are so happy for another victory demonstrating that when you're suing child protection "correctly' the right way and timely you can win! 929-277-7848. 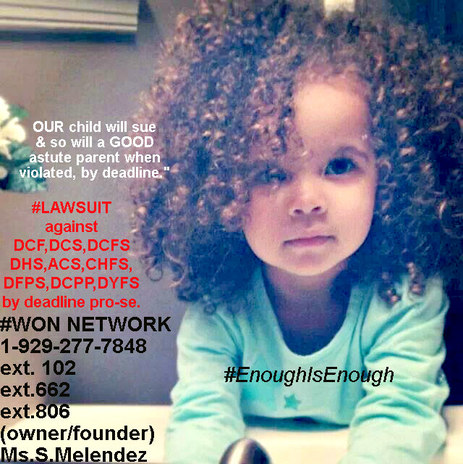 When it is clear based on the actual facts surrounding a child removal,and or an officer detaining one's parent/child et.al, that to a reasonable officer/agent/cps employee et.al, that the plaintiff clearly did not engage in abuse and or neglect or imminent risk to child et.al.,
premise on ALL  of the information "at that very moment it is not in any way unclear that, while a caseworker et.al., social worker coast-to-coast shall attempt to weasel out of the actual suit they are now being prosecuted on in civil federal court, there simply is:

'No qualifed immunity exist,for an officer/CPS agency individual worker's being sued, for civil right damages, in federal court when these facts present themselves to an astute FEDERAL DISTRICT COURT JUDGE.We, at the Women Winning ONLINE network love to see this for many across our nation in the 21st Century who are winning,and that encompass the owner of the W.O.N.Network and her beautiful 2 daughter's who were violated in the most grotesque abhorrent way all the while caseworker's knew the abuse did not exist,and the'real torture only began "after social worker's lied under oath and withheld such evidence, voluminous level that would have otherwise IF presented same weekend of the children capture,would have let the children to return home, and not suffer gruesomely without mother for almost a decade,and the loving suburban good mom would have not suffer a great loss for almost eight years.

Such articulable evidence everyone would have to be at "that very moment" in existence..."

Case in point:
See below &
​ #LEARN today, do not wait until deadline then you're never going to know if a judge would have allowed your suit,with such merit,to be able to win such important right to move forward."'EXT. 806

CPS employees remove a child for no reason only to make their status quo for a month,and continue such unlawful paridgm, by exhibiting such disregard for the children who are clearly not at risk,and leaving the one's who are really in NEED of removal, in direct harm's way.  Such removal by an all too willing happy social worker, in a roughshod manner, is exhibited throughout California on a weekly basis, to New Jersey, NYC,Arizona, Nevada, Connecticut, Massachusetts, St.Louis,MO, to Delaware,NJ,tri-state Pennsylvania,Maryland,Tennessee,Ohio,
Alaska, Oregon,Hawaii, North Carolina,South Carolina,Virginia,Nationwide." 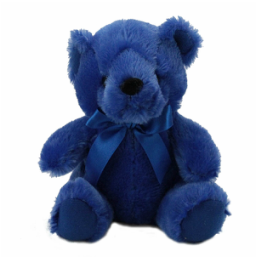 Child...
An innocent lil boy(teen child) was under state care for years.

​
State again failed yet another one of America's Most Innocent,most beautiful..
and that is the child.

This helpless teen child, in Illinois suffered for years while in state 'foster care' and under the supervision of D.C.F.S.


Media reports that, a settlement against multiple workers,the agency et.al, for a child teenage-child who was violated by the agency where the caseworkers assigned has failed him.

$4,000,000 IN DAMAGES AWARDED TO A NOW GROWN ADULT WHO WAS HARMED FOR YEARS IN FOSTER CARE/UNDER STATE SUPERVISION OF DCFS.


CPS failed to follow their state mandates and their own policies and procedures, and left a little boy,teen child,
with a caretakers who brutalized  him in the worse way, all while living under the supervision of child protection services,for several years.


Now in his older early 20s, the child was mistreated for some time under CPS care.

CPS failed to protect him, even though the onus to do so was clear WHO was responsible for his well-being.


Damages associated with the torture he was forced to endure while under state supervision.

Media reports that  cps allowed this teen child for years to be subjected to abuse.
He is now in his 20s and won his lawsuit,as we pray he can finally have some peace after such horror by CPS.


Bring tears to our eyes to read what has happen to him,as our own founder girls torture when they were only seven and ten years old for almost eight years. CPS simply let this child who has won his settlement, suffer for years and years,and now at least there is accountability.


Reports were ignored for some time by CPS.

MEDIA Report summer of 2015 cites that:

The young teenager had been starved at times, and severely hurt all under CPS supervision and care,while the assigned CPS, DCFS employees and COUNTY all failed this child, per individual caseworkers/social workers who for some time lied.

CPS lied, on his true status, his true condition, while under state supervision, repeatedly"breaking the law his attorney validate, while in state supervision per caseworker sued,while as the evidence support failing to protect the child."


Media also reported that for years, CPS knew and or reasonably should have known, the danger for which the child was being exposed to.

Such lawsuit reveal just how poorly this innocent child was treated, beyond tragic, his attorney has cite,to the media.


Such child has clearly suffered abuse,and neglect for years,and CPS simply allowed this to happen.


No one knows more than those who have been through CPS horrific act(s)that has harmed one's loving family,children, than others whose trying each day to survive what has happen to one's child,who had a right to be protected once CPS assumes such custody,supervision,care,control of the child. No one really knows more than those, as our founder Ms.Melendez, who has for almost a decade with her girls, suffered with her girls day in-day out premise on violations by child protection services caseworker,supervisors,the agency systematic failures,we see nationally all too often everyone,but are happy this child now an adult in his twenties, have won his injury,civil rights damages suit for $4 Million. We pray for his continued recovery each day.