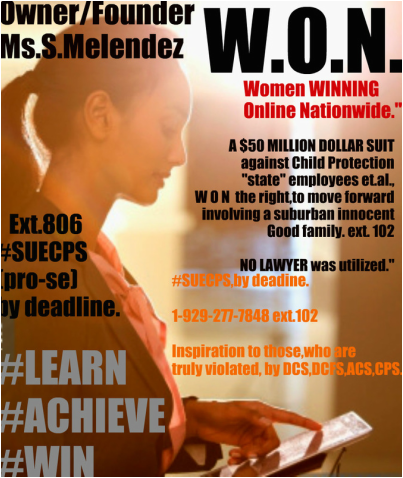 Our founder, Ms.S.Melendez has won her $50 MILLION DOLLAR DAMAGES LAWSUIT
(winning the right to move forward that is, against multiple workers, employed by the agency.)

She filed pro-se and media has validated, her recent winning decision.
-
She continue to focus, on LAW SCHOOL AFTER DCF/DHS employee(s)severely-tragically harm her girls,

and her self for years,as validated by the news/media,on her lawsuit that has WON right to move forward in federal court.


Read more below, as featured on news, in media,when first announced, when so many ostensible lawyers in multi-states, at first said, she couldn't sue CPS,couldn't be done."

She has hence,proven EFFECTIVELY each lawyer wrong,and has now focus on implementing in due course, law school. Inspiration for all who are attempting

to sue timely by DEADLINE cps  known as pro-se,self file.ext.806


​"A parent's withdrawal of that solicitude, nurture, and care for an extended period of time is in itself a harm that endangers the health and development of the child..."

Most good loving parents, such statement from the court do not apply.
-

The children are legally kidnapped from such loving parent, not 'given away" to a state agency like New Jersey DYFS, DCPP. Coast to coast you're seeing this happen too often. Good when we see another WIN when suing for damages against per social worker, caseworker involved,with the federal violation of one's rights and or a therapist, and or other "state"employees et.al.,under Title 42-Section 83,85,86 etc.,


U.S.District (Federal)Courts of our land has done what was long overdue as experts agree, for a family who sadly, suffered  the most grievous harm and loss for almost a decade and growing(13 to 15 years now)of fighting for what is right. When the owner, author, founder of the nation's 1st EFFECTIVE-PROVEN Women's Winning network online,

S.Melendez file her lawsuit as her girls their family were in the midst trying to also hea through it all.

Family called 118+lawyers at first, who all said NO or you're not able to sue a "agency" et.al., or its individual workers like CPS,but mom knew better. She filed her own, and the rest is history." Federal Court, approved,as she WON such right to see her PRO-SE ...(self file) suit for $50Million in damages,move forward, without the help of a lawyer at all.


Such recent lawsuit winning decision, has been proven thanks to media,news covering her tragic ordeal,as she continue to now aggressively with such fervor, study aggressively from her legal studies in Arizona,to California knowledge of law studies to east coast NJ/NYC tri-state nationwide,to see to it she will one day in due course,take the bar exam in multi-states, after law school implementation.
-

Such lawsuit as you're going to read more below, (prior to calling our busy help/hotline)she refuse to allow Child Protection  Services, dyfs,dcpp dcf to lie under oath and assume they will get away with such lies involving her little girls "gia and tia" wrongfully and continually removed since age 10 and only 7 years old, in violation of all three rights, under our well-established U.S.Constitution.

She did not let a lawyer telling her NO stop her,
from (by deadline) executing her lawsuit(the right way everyone) pro-se, and prosecuting each claim against the liable defendant's who has clearly left her daughter to fend for self, as the other, and used the state bias family court for their own amusement, while two little girls were fighting to live, survive, as a suburban innocent loving good soul,mom was in court being told, her girls were:

DCP&P said under oath how our founder's girls  were fine "after" removal illegally by a caseworker, Sebastian Antony, Carlos Novoa et.al.,@Union County DCPP, yet such statement were all lies.
-

​Knowingly the employees for NJ dyfs,dcpp,simply lied,all the while knowing the truth,in violation of the girl's and mom rights,for years,that ended up causing all three even more harm,pain injury for in totality shocking the conscience of all coast-to-coast,it cause harm for almost eight years, almost a decade.
-


CLICK to read more about the founder winning decision and her victory, now focusing regularly on law school implementation.

​Such federal court has done what was right and as experts agree, "It was a long time coming, and shall result in others realizing they can do the same, without a lawyer pro-se when they are FOCUS like Ms.Melendez and learning perfectly how to sue CPS in federal court, by deadline, pro-se. Inspiration to many.
Help Form?
click
here 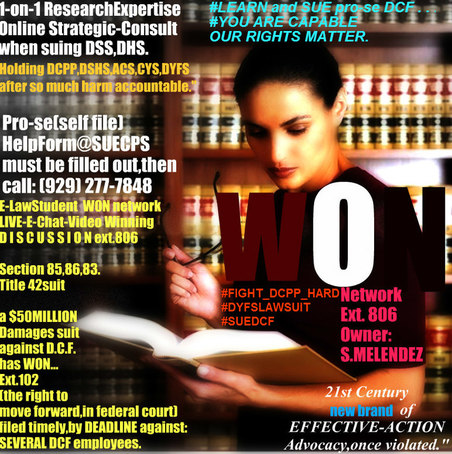 A case we share on this most relevant page for years is one of a where a mom lost custody WRONGFULLY unjustly to her prior ex-spouse.

So similar is the case in california Ms. Fogarty-Hartwick.
-
As our founder, Ms.Melendez the ex spouse was involved and a agency who could care less about the BEST interest of the children.
-

​She later found herself, in a maze of
-CPS inequities
-Intentional harm
-deliberate indifference caused by such agency worker's who did not care for her, nor the well-being of her two daughter's.
NBC Reports:


This dedicated loving mother who fought and Won $10.6 Million.

Actually when you're reading more on this mom, analogous to our founder, Ms.S.Melendez case, both have fought the wrongful act(s) the clear reckless disregard, the continual removal (After initial wrongful removal) of one's child, as a result leaving multiple victims thanks to DCPP,DCFS,DYFS,DCF et.al.,
C.P.S., when you're researching you're going to compare both winning cases so incredibly similar."

(With the help however of a wonderful lawyer who was going to fly out to also represent our founder,boss, ms.melendez. )

Stayed a very short time in foster care, but should have never been there in the first place, hence, therefore it is irrelevant how long, as experts coast to coast wholly agree,same as our boss case-suit.
-
Deanna first won rhe much lesser amount of $4.9 million awarded by a very astute prudent reasonable-minded california jury,
who reportedly wanted to as media news reports validate,"punish" the actual social worker, caseworker supervisor
and or the agency as a whole,premise on the failure to either a.)simply settle reasonably for the 2 girls, to avoid a  JURY trial,
or #2.) by the subsequent appeal to follow et.al., as it was clear by all accounts:

-Caseworker withheld exculpatory evidence- and the jury agreed easily on such factual when it was properly presented.
-
-DCFS lied, when they had earlier attempted to get the devastating emotionally sadden mom to even sign document through the method CPS workers are acclimated with and that is through "coercion." They threaten IF she did not,they are taking her kids.
-

​DCFS  and or suppress relevant information insofar as i.e,  social worker said, how the girls were either doing fine and or was not at any type of "risk" and later the lawyer learned the 1 daughter clearly was traumatized/having a very hard time.

Jury was able to see this ALL and it clearly proved what the mom DEANNA already knew. DCFS was in violation of her girl's rights and her own rights as the parent.


(Orange County,  DCFS attempted to get the rightful verdict dismissed for the 4.9 million or lowered, the mother ended up incredibly winning almost 3x that as her wonderful lawyer!) Gotta love it when JUSTICE works and we are proud of all of you here in NYS,NJ,DE.PA., tri-state fighting for what is right when harmed, as our founder to California, Oregon,Washington State,to Nevada,Arizona,TN.,OK.,GA.,NC
nationwide. Ext.806

(Whether the Deanna Fogarty-Hartwick winning lawsuit and her 2 girls,

No matter what everyone:


- Caseworker will lie, falsify, perjury one's self, while your child is sadly being:
- Forced-Kept apart from you-
- Rights being terminated premise on 1/2 truths,under oath falsity by dcpp,dyfs,dcf cps.
- Raped-
- Sexually Abused under state supervision
- Emotionally tortured/Mentally Abused.

If your spouse has been remove from your home premise on DYFS forcing such loving spouse to "leave" their own home,

​LEARN your rights, and STRIKE BACK when suing pro-se for damages,if no lawyer(Care)to represent you. DYFS now refer to as the DCP&P always rely on those who are not realizing their rights and you have MANY rights, involving your loving INNOCENT family that you MUST learn and quick,BEFORE your violation gets any worse.


Remember key points, that will be very helpful as it was to OUR staff member who already has WON...(At the level you're still trying to reach)


2.)To always search hard for a lawyer to represent you. Sadly...most can care less, but don't think you can't file."
-
Our Founder, Ms.Melendez called over 118+ lawyers.

She simply REFUSE to give up,while her pro-se self file winning suit was pending,she continued her search throughout... Inspiration for many."

Our  founder day in, day out, for years, only focus now on implementing law school,for the betterment of others,who are sadly still being horribly mistreated by DCP&P,DCF,DYFS cps per violation."

​Inspiration for those who are "truly" violated.
DISCLAIMER:

As seen across net,during session(s)and on facebook et.al, ALWAYS search for a lawyer. Don't just call 1 either.
​
CALL MANY and or ask for referral when you are having your 1-on-1 educational empowerment E-CHAT,and or your 1-on-1 video conferences,and or phone-in session.
Our virtual office student expertise,empowerment ctr.,

​are not lawyers,as clearly identified throughout.


Never give up.
.
If lawyer is not suing for you,as seen nationwide, do not fret.