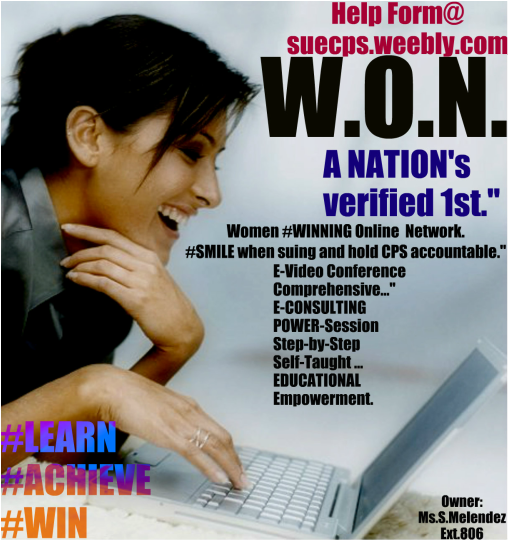 #SMILE when you're finally realizing that even when a lawyer do not care about you, to represent you with such zealous,astute mindset prudent and aggressively, regarding a custody and your federal lawsuit for per civil right damages, against DFS,DCS,DFPS, just smile knowing you're going to be either way to file as a pro-se litigant, within the time allotted by law, to hold caseworker one day, accountable. Beautiful moment it is when you're realizing you ARE indeed capable of doing so known as pro-se(self file) 1-929-277-7848.
-

​Whether you're being violated as a mother(good)loving parent in Las Vegas,
to Los Angeles, grandmother in Parrot,GA.,or the ATL,to Edgecombe County to Newark,New Jersey, East Orange,to San Diego, Orange County,to being violated in San Bernardino, Nebraska, Des Moines, to Wilmington, Delaware, to Wilmington,in NC.,
Maryland,to Washington, Virginia, South Carolina, Ohio, Houston,Maine,Connecticut,Massachusetts,NY
No matter where you're suffering premise on CPS, you're well within your right(when a lawyer,as seen per state do NOT care enough about you, nor per child to sue)well within your right to file a suit pro-se,self file when violated by:

DFPS,DCFS,DFCS,DCF,DHHS employee,
but time is NOT on your side when DEADLINE
is near per day you're still not taking the prerequisite action.
Ext. 920/102/806

When you're reading two completely analogous winning cases below, you're going to then fill out the
E-HELP form,(CLICK)
to begin at once you same-day ,
1-on-1 POWER SESSION.

Both suburban loving mothers. Innocent. Yet DCFS ensure both would lose years with their girls, and we know many are able to relate.
​
Both  severely violated/hurt beyond repair in many ways, as their daughters for years on end,til' a lawsuit was filed for damages.
​
News mainstream aired such story, along with multiple newspapers,

and was featured on NBC, hence continually inspiring to others nationwide when a lawyer do not care to represent you, when violated."

The 2 analogous case-wins below were not going to let their DEADLINE arise, and let a cps employee unlawful acts, go by without being held (lawfully) accountable in a court of law.

Be sure to read on and bookmark such page then fill out help form and begin your
1-on-1 POWER SESSION today." Ext. 920

More on the founder, author, Melendez incredible case of evidence withheld, material fact(s) numerous encompassing with the shocking discovery of just what level dcpp, dyfs dcf et;al., will go to in order to secure a win.
-
Even at the befallen of two innocent little girls and a good loving parent, who refused  to allow them to win after harming her girls...
...
Now ...
​
Read more below to compare by reading below, such  winning case out of california for which the similarities are chilling,  in support of such suit already winning at same level, our boss + founder, Ms.Melendez 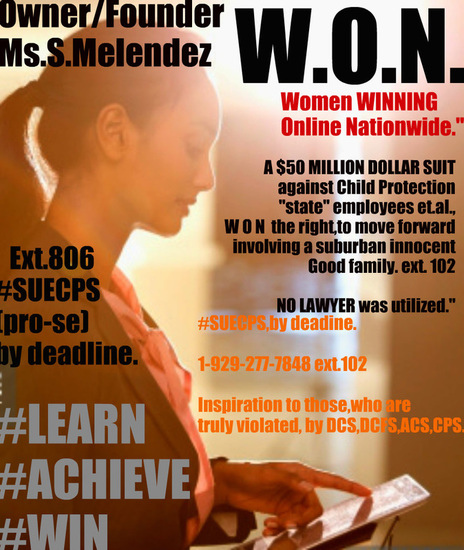 It is clearly established by now to anyone with a reasonable mind as a jury shall agree per expert interviewed, consulted throughout Washington,to NJ,DE,tri-state,
to experts lawyers et.al, throughout  California and all states in between:
-
The owner/founder Ms. S.Melendez @ WON network, family was not only bruised by state employee(s)for almost a decade and growing but clearly and inextricably undermine at NO fault of their own.
-
The Federal Court allow $50MILLIONDOLLAR suit,
for such suburban woman,her daughter to move forward, for such damages being sought rightfully so, as media news verified the DCF agency:

Knew daughter was at all times under state supervision severely harmed,and yet would lie to the parent of such good, the mother, and make it appear fictiously her girls, then only 7 years old and ten were "thriving and another report altered cites to the judge, the girls were both doing just "fine" and how DYFS of NJ on this case has"done its job,so no need to even bother reuning the mother with her own children."
-
FEDERAL COURT (3rd Cir; has allowed such most warranted lawsuit for damages move forward) involving per cause of action/claim(s)various torts et.al, being sought against the liable agency, and or its individual LIABLE defendants." The amount of injuries associated with almost a decade lost of companionship, freedom(s) our liberties as Good Americans, parent to child bond, our entire world turned upside down, is untold damages,experts agree for years and years to come. Ext. 102
​-
As trained qualified experts weighing in on such clear meritorious lawsuit for parent/the daughters, in North Jersey, a few other experts  in california, chicago,indiana,north carolina, arizona to south jersey and nationwide stated, "after"seeing the file/learning the events tragic to this loving once happy family, that  whoever supported the fabrication of evidence, the lieing under oath consistency of perjurious statements to a material fact, in sworn affidavit knowingly a judge will be relying on them,(four judges!) over a almost eight year span of violations, whoever supporter either the agency worker's being sued, supported such avarice, such stupidity willfully recklessness involving a good close-knit happy family should've been no longer allowed to work at such agency around any children. Ext.806
-

Read more below, prior to calling in and ask for her direct extension over @ 806  Help form must be filled it prior.Thank you.


DYFS #DCF #DCPP violated the constitutional right of a parent and knew it, and yet kept doing what they were doing to keep the girls & mom suffered throughout and how DYFS violated also the right of the girls, who had a constitutional right to return home/be with mom and continue to live in a nice home with a loving normal focused parent without being subjected to clear torture.

The Division Youth Family Services,  The Dept.of Child Protection and Permanency et.al., were clearly without a doubt,(only need to prove in a suit, it was "more than likely" based on a preponderance that Union County DCPP cause the harm to a loving suburban parent also harming her girls et.al.,

CPS  employee(s)engaged in manufacturing of evidence/false proof(s) to a statement provided of such falsity for almost a decade,to under oath consistent lies,to ensure:

The findings involving a state employee/agency DCF if evidence exist, as case law wholly support,
shall alter one's life forever. It is pretty clear,well established the state workers in the founder publicized lawsuit as her girls, that several (not 1 or 2,as only needed/required et.al.,)when proving such damages, but several workers as clearly established:

-Hindered the fact 2 lil' healthy girls, were seized.(Fourth Amendment violation CLEARLY-ESTABLISHED)
-Hindered the fact a great parent to her girls was innocent,educated well-spoken as said in a "withheld report by dcf.


-Hindered the fact, the supervisor assigned also knew there was no legal basis as written, to keep "Gia & little Tia."


Hindered the fact, a state employee for dcp&p, dyfs, shocking the conscience additionally hid/withheld pix of child healthy body without any abuse on her at all from the loving parent, as said per hearing for almost 8 years by DYFS. Click for more.