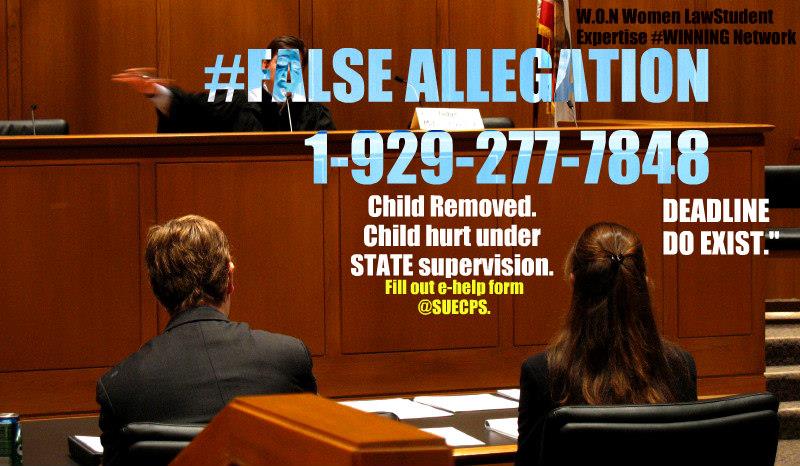 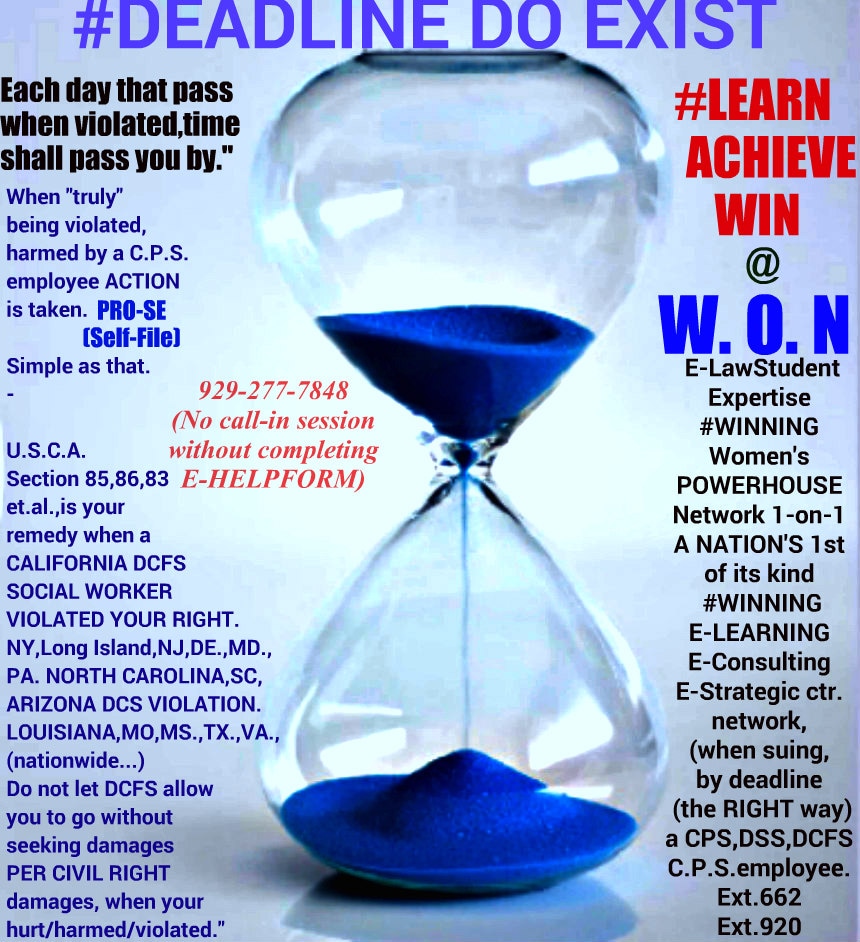 If you're clicking on this link prior to calling in to begin today, you're reaching the actual  continuation from such lawsuit fact(s)involving how a Federal District Court prudently did not dismiss a lawsuit where a child was:

>Kept in an isolated area repeatedly where she was clearly severely injured,at the fault of worker(s)at the very troubled (As media cite for decades, troubling, dysfunctional agency in union county)who are under/and or were at the time under FEDERAL WATCH, (check news source/public fact.) The DYFS(now known as  DCPP)but shall remain to the world nationwide/statewide as abhorrent cps #DYFS #DCF workers @ DCF,DYFS, who, were for years under federal watch,and was listed for a long time as publicly in the news the "worse of this nation insofar as casework goes and the owner,founder's meritorious much needed federal civil rights suit is proof of that,beyond measure shocking the conscience of all who view,with a reasonable mind." 1-929-277-7848.


News on such shocking factual suit validate that:

Many worker(s)once known what was going on discovered was let go by the agency during such time and or re-assigned permanent.
Ext. 806
-

Such agency workers already shared public verified(for not 1 day or a month, which is long enough as
NO JURY shall disagree, but for a shocking DECADE almost.:
>lied consistently and  willfully knowingly with malice to fabrication of evidence and or the suppression of evidence,such malice shall be clear @ a jury trial experts agree for damage(s)involving specified workers @ DCF.
>lied on a child condition,not once, but shocking each time for years, while a caseworker withheld gruesome fact.
>Misrepresented the overall facts to align with the social worker,caseworker botched,chock-full false report(s)as the motive was clear at this point(hence suit commenced timely by deadline against all...)ext.806
-
​
Hindered the fact that multiple employees for  UNION COUNTY feign, the fact pix did indeed exist that would've so easily cleared such parent and the girls and parent would have never been injured almost 14 years now.
-
Hindered the fact the photographs taken during such investigation(without mom knowledge)caseworker even told the higher Court of Appeals,
"dyfs worker had no  knowledge of any photographs taken to support mom version of the fact that no injuries consistent with abuse had even existed."

Yet, the incredible founder Ms.Melendez painstakingly never gave up...

She, along the way of 24 investigatory into what really was going on with her girls, became her life without any interruption(hence, lawsuit proof of such and allowed her to get farther than any other parent publicly known.)

She (prior to applying at law schools) she had discovered such shocker along with her then custody lawyer of bergen county, who fought so hard for her after others failed her, 1 lawyer, by the name of(in private practice) Mr.Jonathan D.Gordon Esq,
and mom learned through a tip, there was existing photographs depicting her girls were not at any risk at all KNOWN to the dyfs, and how the photographs was absent the level of abuse that not one, but several workers, to a large degree,

swore under oath shockingly for years to make it appear the girls were at such "serious risk, that if they were not SEIZED/HELD/DETAINED summer of early 2000s into 8 years later, the girls would be in danger."
ALL was false...
-
Defendant(s)in founder meritorious warranted civil rights injury violation suit, are only presenting (again) as experts cite, "False info/information that was clearly NEVER substantiated that would rise to the level of keeping a little girl away from:
1.)loving mother.
2.)their childhood loving secure home and away from all that was known to both little girls ages only at the time 7/10.
Ext.806

​her injured family $50MILLION DOLLAR SUIT for untold damages, multiple documented years worth of serious injuries, countless number of civil right and constitutional right violations et.al, for almost a decade strong, when all the state agency employees had to do was adhere to policy, but yet, couldn't do it.

Any other caring honest-to-good caseworker, social worker would have not engage in such pattern of clear flagrant gross-negligent unlawful acts unbecoming to a state employee."Ext. 920


Hence, as a result mom and girls suffered as all experts worlwide agree immensely, untold damges for years and years to come everyone. 1-929-277-7848 ext. 806

DYFS employees at the Union County Local office willfully,recklessly,or intentionally for almost a decade shocking the conscience of all worldwide,from lawyers, police, to experts,to our readers nationwide,

CPS knew and or acted with clear recklessness for some time, when they were falsely accusing such loving parent, hiding the daughter's at risk situation(once removed) quite well for several years,breaking the law while doing so,kept the girls at each turn away from mom, without ever making a necessary by law, finding of abuse,imminent danger,exigent circumstance, neglect, serious physical injury; and or proving 'on the day in question, the loving parent was a risk to the child;

as sued (properly)for 14th Amendment violation, the interviewing of her girls without a primary residential parent consent at the time, to suing for the additional claim(s)of emotional distress for almost eight years,for holding her 2 girls without such cause; fabricating years on end; fabricating evidence and for such improper training of its' DYFS, DCPP,DCF employee(s)assigned to this most tragic case.

-Hindered the fact the loving parent, our founder:

-After child was sadly illegally/unlawfully/unconstitutionally detained,
the girls suffered horrific torture for years at each level."

State agency, and or its individual cps employees clearly knew.

​At least 1/2 dozen minimum to a dozen knew at one time or another over  eight years yet withheld such shocking fact(s)insofar as but not limited to one child was not even at the home of the ex spouse as cps sworn-in under oath, lieing for years saying she was and how "well"she was doing living with her father, his new wife.
-
Child was hence shockingly "missing."

DCPP,DYFS has now lost the child, while mom is still being
>Barred from seeing her.
>Intentionally mis-informed her girls, both were doing well, under "state" supervision and there is no risk to either.
-
Another report withheld by these specified liable dyfs employees prove that and have stated how DYFS knew that:

Melendez,  had a legal right to "bring the child home,said by another caseworker,working under the supervision of
a DCPP,DCF,DYFS supervisor who himself,also knew such factual information, but yet  NO ONE turned over such relevant credible evidence, prior to a lengthy un-warranted farce of prosecution fact find hearing, a  trial against this now injured(severely)for years loving parent, turn law student pursuing  for a law degree in due course in california, nj, ny tri-state and nc.

She has seen what has happen in all states mentioned, where her family are living,nieces,nephews,siblings to parents,her family across state to local,and she will pass the bar exam for other innocent GOOD souls to NOT have to suffer by "not being able to win against CPS, as she now has after almost 15 yrs of suffering herself, UNCONSTITUTIONAL.

News report verified, the founder of the W.O.N.Network#SUECPS by deadline pro-se,

her family civil rights suit  $50 MILLION DOLLAR SUIT has been APPROVED the U.S.District Federal Court,
3rd District, who unlike incompetent bias state court,at least in this case, the FEDERAL court,has done what was  warranted, and that is to give the family injured back a  modicum of justice long over since early 2000's, to the late 2000's., Ms.Melendez news verified suit was filed pursuant to U.S.C.A. Title 42 Section 1983 AND conspired act against caseworkers, employees for the Department of Child Protection & Permanency prior known as  "DYFS,DCF."

She filed it all on her own without a lawyer. (Not for the lack of trying everyone. She called 118+) coast-to-coast,but not one(at the initial filing suit phase)not one lawyer "caring or astute to file." It sure didn't stop her none, hence the rest is history proving you CAN sue for per injury associated with DCPP,DYFS.

The owner Melendez along with her daughters and her family   made sure as a team, a loving family GOD along their side, the FACTS finally after so long will reach a "fair" and impartial non-bias FAIR judge for consideration in the U.S. District Federal Court.

Such lawsuit consist of various torts, state common law/and additionally federal claim(s) and other staid numerous cited claims associated with the clear destruction of a parent/child right to remain home and free from infringement of one's rights,under the United States Constitution and won.  #Goodluck to you all. Ask for ext. 806 after help form is implemented. No call shall be connected without your help form/contact us page on this site is filled out."