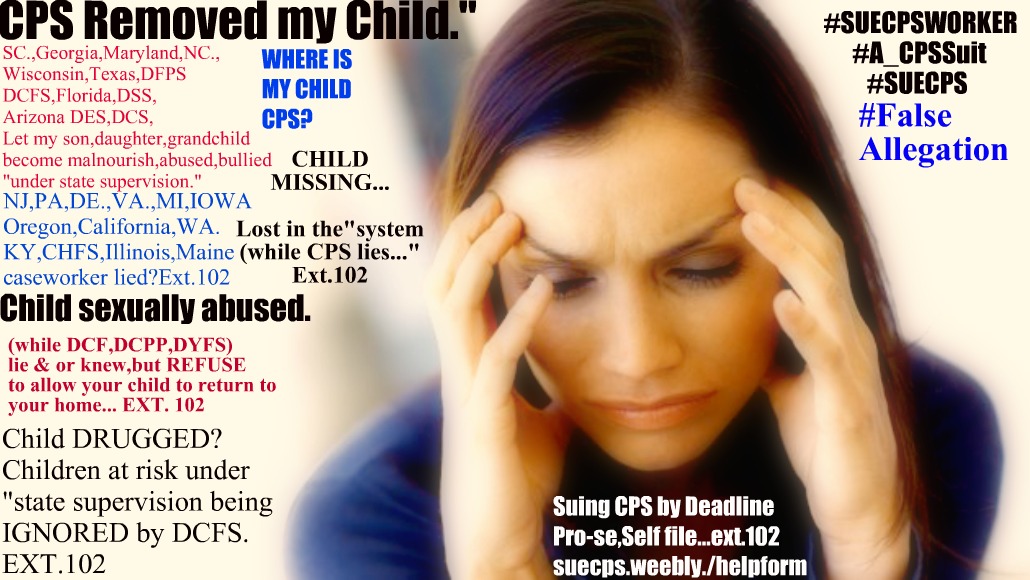 Families are fed up.


" Between a lawyer misleading
to CHILD PROTECTION WORKER violation(s)
how can they not."


The"difference is:
"those who learn and sue...CPS, timely..
As simple as that."

Sitting around online day in,day out complaining is not ACTION.
Applying astute timely strategic-action is and we commend ALL prudent
family members,who are doing so,BEFORE deadline...


Those who apply their own logic,reasoning and
that would be with OR without lawyer,to sue cps.

ANOTHER WIN validated for parent who sued CPS.

Good to see more are suing cps coast-to-coast
"when they have(truly)been violated."
-


We commend you all.


NEW LAWSUIT WON AGAINST AGAINST WORKERS AT CPS.
---


Our student ctr., have been following ourselves quite closely
everyone.Parent sued multiple workers over @
child protection services,for violations,pursuant to:


SECTION 1983 85, 86 et.al., insofar as seeking family damage(s),
in which multiple caseworkers,social workers infringe on  their most inherent rights,
while the children were force to undergo, invasive, the continual
intrusion by workers, who as usual, assume they can do such abhorrent act and just
"walk away scott free, without accountability,


However,once again federal court sees it another way, and has again as seen
coast-to-coast are doing what is warranted, concerning the well-established
constitutional rights of us,the Good loving families,violated."
EXT.102
---

Father wins and Mother + two young children
Over 1 MILLION DOLLARS,for their suffering
and the children,the parents, all sued,most important
"as a family,and timely,and WON against C.P.S."


As we always remind all here who call in,no one know better how it feel to be so badly violated,
when you're  a loving parent,and the children have suffered,from age newborn to teen children,
when"under state supervision."

"If you are not applying your self,by search for a "caring lawyer to represent you,
file your suit pro-se,self file, so at least you have a fair (federal court magistrate)judge,
at least consider you for damages,
after cps worker  has took it upon herself,as in the SWARTHWOOD family
seen below,and violate one's rights.