Let's look at some examples prior to calling in today for your 1-on-1 learning E-SESSION in the tri-state DE.,
NJ area and across the nation and #STUDY #LEARN and when you're suing, deadlines throughout must be met.

---
In another lawsuit involving the Third Circuit; 1 of many wins analogous to our owner founder of W.O.N. :

Mother was able to prove to a jury/trier of fact, such defendant (DFS)knew someone who was also involved in such case, on a personal level. She invoked such conspired-act(Section 85)claim. (State) lawyer attempted to have such viable claim dismissed,and lost.

Federal Court agreed that, based on the information provided from the injured mom, a reasonable fact-finder could conclude that they conspired together against the parent,hence, violated her right and prolonged the return of her children." In such case, the social worker(caseworker originally assigned, during a deposition barely knew her own agency"policies, in removal of a child..." Actually her supervisor had seemingly knew less! Judge hearing such lawsuit in 3rd District, also added how the caseworker(s) INTENTIONALLY withheld/misrepresented crucial facts, and lied on 1 of the son's whereabouts for some time. Judge cite," I am troubled by such actual concealment of fact(s)involving one's child by a state agency like DFS.Judge added in closing," The mother and children have presented "more than enough/sufficient" triable facts, a genuine issue, on their continual removal, fraud, emotional distress claim(s)14th amendment, to proceed against the worker's for the state agency and another agency, and the county, on compensatory$damages.

Mother lost her girls to an ex spouse(west coast) based on false allegation(s)by dcfs.
Lawsuit was filed.

It took about six long years to become reunited with child(ren) 2 teenage girls. Mom was able to prove out of "2" to three social workers, that 1 withheld +  the other was repeatedly lying throughout. The other caseworker was found not liable. Mom won, along with daughter 9.3 million(+ lawyer fees) and what is known as punitive damages. Such winning suit also made NBC news and other newspapers et.al., for yrs.


West Coast: A father wins $100,000(before lawyer fees) when a cps social worker/caseworker took his child away from him and then  lied, falsified her entire report. Good dad, lost about 10 months with the child. He won without jury trial. Summary Judgement DENIED.

This winning settlement/suit was not made public.
Ext. 102

West Coast:  Parent rights were terminated, by DCFS unlawful act(s) and this was at the time proven incontrovertibly ... Mom fought back after terminating parent rights and won a Quarter of a Million Dollars. She never, at time of press, got her daughter back.
County was also successfully sued.
Ext. 920

In Delaware/PA.,NJ.tri-state, parent sued for a failure to protect child, who was later sexually abused under state care and supervision. Mother won unspecified damages. Ext. 9531
-

In NJ: 2 young girls...
One was a teen.
Both girls won 1/2 of million in damages involving the failure to protect the child.

-In NJ: Teen boy won 5 Million while he was kept in harm's way in a foster home.
​

In NJ: A little boy now a teenager(grown)was physically abused, by a foster "care" parent. DYFS left child in harm's way, and the parents later, with child sued and won un-disclosed damages.(This was not made to the public.) Ext.920

Across our nation, so many lawsuit(s)analogous to the owner, Ms.Melendez, her daughter's  have been proven @ the Motion To Dismiss-and- Summary Judgement phase that a reasonable fact-finder could conclude, if the caseworker was aware at the time, that there was "no abuse/no imminent danger on the day in question, you're able to move forward with your lawsuit toward jury to assess for such damage(s), as such relevant  multitude of case law as our owner's lawsuit and her daughter's has overwhelming proof of such as media validate.

i.e.,
NJ suit involving a child-teen:
>Hit with a belt steel buckle. His parent reported this to a caseworker and NJ-DYFS-ABUSE hotline many times.
>Foster parent also threw a "shoe"at the boy then 13/14 yrs old.
>Foster siblings bullied the teen-child, to the point of  suicide ideation.
>Sex abuse to the teen boy...
Lawsuit was won...
(Settled 2 weeks prior to a trial where jury would have learn all of the wrongful act(s)caseworker had done by failing to protect the boy, even though there were signs/warnings of the child-teen being at staid risk for an entire year or two."
Ext. 1359

​
A little boy was physically abused, significant bruising/emotionally scarred, due to foster care in NJ.

The little boy parents fought prior to bring him home, but DCPP/DYFS MADE IT IMPOSSIBLE for 3 years.
This suit was not public. Family settled/won.
---
Two sisters won $450,000 AGAINST DCPP,DCF. This was public.
​
Ext. 860

4 boys won 12.5 million (highly publicized)when a caseworker for SOUTH JERSEY DCPP,DYFS LIED by making it appear the boys were "being taken care of, in their new placement."Completely a falsehood exerted by DCF/DCPP.
Ext. 1359
A little girl was abused under state dcpp supervision, where sexual abuse/molestation occurred. Lawsuit won for un-disclosed damages. Ext. 806

Siblings won $750,000 in damage(s)when, once again, DYFS(DCPP)DCF dropped the ball in this instant case, for some time, causing serious harm to three children. Teen-child the oldest, at the time of injury was 17 and the youngest a pre-teen. 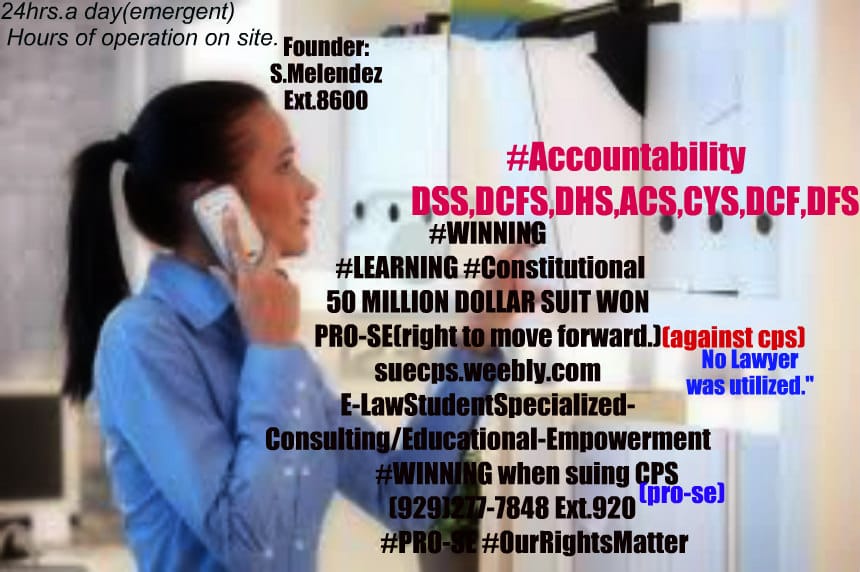