Imagine your child/grandchild being dropped off @ school and or a family court ordered visit and never return. Our founder, now a law student, going for her juris doctor/law degree, expertise in such field of suing pro-se (the right way) has experienced just that.
Only difference is she fought BACK and prove you can win against a cps employee when suing by deadline(correctly) and pro-se."
​

Whether in Texas to California,Arizona,to North Carolina,NY,PA, DE-NJ, such lawsuit(s)are being won and filed in a timely fashion against child protection agency workers at DFPS, DCF et.al., ext. 806

​A 4th Amendment Lawsuit against  Department of Children and Families LIABLE caseworker who withheld pertinent information clearing parent, a conspired act that has come to light,for a jury to review/assess and adjudicate by a FEDERAL judge  as a caseworker knowingly, and or recklessly,willful, with malice, hid such, buried the report(s) clearing parent, buried and or withheld knowingly such truthfulness insofar as the status of the child, while she was taken into state custody " 13 DAYS ..." without a court order, judicial authorization,or necessary warrant for just about two weeks, as case law wholly support, is a 4th amendment clearly-established, well settled, violation of one's 4th amendment right.


Experts from California,NC,DE.,NJ PA.,VA.,NV.,WA.,NYC, CT., and other states weigh in,agreeing that, "No reasonable jury shall disagree, when the evidence of the parent being innocent all along, when the caseworker, several agreed multiple times during an entire 14 days (most relevant)when presented accordingly with such set-of-facts, based on  a preponderance,  insofar as a caseworker,

if placed in the defendant's position,would have done the same thing, when you're having the facts below, clearly prove there was absolutely no abuse, no substantiated incident of abuse, nor neglect, and how the state DCF workers, all knew it, documented such in a withheld internal CPS file and then appeared in court, while kids were "waiting to go home at only 10 and 7" knowingly lied, falsified, and hinder such significance for the next several years, shocking the conscience of many reasonable minds weighing-in.
​
​
As a result, the gruesome injuries, violations to the girls continued taking place for almost a decade. Accountability is near, thanks to the U.S.District Federal Court + a suburban astute prudent parent who never ever looked back, never gave up and sued and her family filed suit just in time, by deadline."
1-929-277-7848. Ext. 806

Timeline of the events that changed two little girls lives forever, and now? Are finally (when older) able to hold abhorrent caseworkers, who were intentionally (documents prove it) clearly dishonest, abhorrent in the way of intentionally(key word)intentionally misleading the court encompassing not "1" judge, but FOUR or more judges whereas, the timeline and such set of facts, allow for a little girl, now older, along with her family civil rights gross-negligent act(s) and Section 1983 suit  for damages as featured in the media news for years, has presented such relevant facts accordingly to the District Federal Court,(pro-se) and WON such right to see it move forward against multiple state employees at Dept.Children and Families. Ext.920 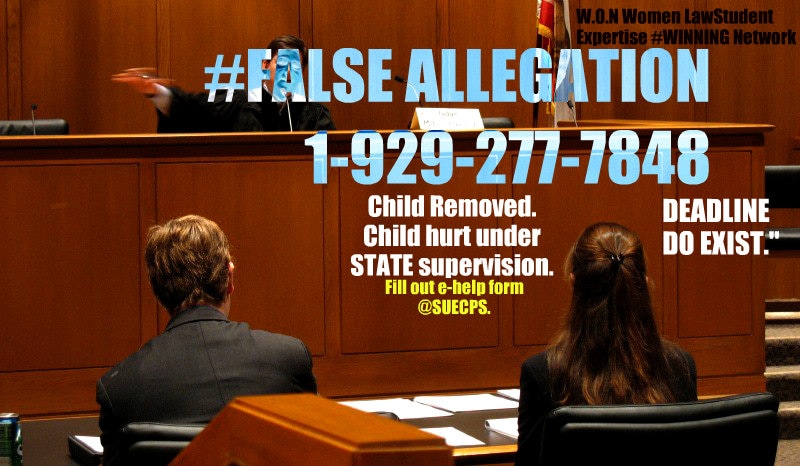 ​​Dates specifically prove, and shall prove to a jury hearing case to apply liability, accountablity et.al.,  union county, dyfs, dcf, could have reasonably believe, that the girls "Gia + Tia" would've been "seriously" harmed in the time necessary that it would have taken to obtain a warrant, and or signed judicial authorization from a judge. When looking at the facts in favor of the
non-moving party (at summary judgement everyone) as experts agree:
​
"No reasonable person in the worker's position could think that 2 little healthy girls would come to harm,in the time it would have taken to procure the warrant, court order et.al., to seize the children 14 (yes, you heard right everyone)  FOURTEEN days.

Most crucial dates,(from time of seizure July 3rd) when the state agency told the grandmother (PGM)'' to keep 2 little healthy girls away from the mother, and to not release them at any time to the mother from July 3rd- July 9th, (1st week) when this was taking place, it shall be clear (to a trier of fact OR a jury) shall be able to conclude the worker's multiples time, not one but MANY all agreed that there was simply no evidence that shall justify a removal from the home, since abuse cannot be established/substantiated. At the time the caseworker(s) were keeping child unlawfully within their state custody for 1 wk, without a warrant,without the necessary court order authorization from July 3rd throughout July 9th, the parent was still not:

>Reached. No call/no visit to go see mom immediately from July 3rd, 4th and so on. Yet, DYFS knew protocol procedure insofar as investigations involving a potential abuse and or neglect incident, this is "clearly-established, and DCF employees know it."
>Not investigated.
>Not spoken to the entire week,going on week number two everyone. 1-929-277-7848.


>No court order.
>No warrant to take the kids into state custody/detain the children premise on abuse and or neglect(serious injuries as needed) et.al.,

The mother demanded to know what was going on with her daughter's who never been away from home this long and the girls were healthy/fine when she drop them off for the july 4th holiday via court order visit to the grandmother to see their father the ex spouse of the owner, Ms.Melendez.(Ext. 806)
-
The Division, as shall be underscore for the jury for damages, never at anytime contacted the parent, and moreover? It can easily be inferred to a reasonable minded jury, the state agency most likely was never going to reach mom, for some time longer when it was already over a week and no 1 ever reached mom at all!(It was mom who had to again reach the agency on july 9th/10.)
-

July 9th, 10th:
Caseworker interview mom at length, and conducted a walk-through of her lovely 1 family bi-level, house owned by mom.
-
DCF employee told mom, "I see no reason as to why your daughter's(who i just seen before arriving at your residence) i see no reason whatsoever as to why your daughter's can't return back home. I will then notify the PGM(grandmother)where DYFS place the girls on July 3rd and i will let her know, DYFS can't substantiate. I will also write this in my notes tonight, and make a report  that DYFS can't substantiate abuse against such custodial parent, not even neglect. [End Quote]

The assigned caseworker then cites, "Let me apologize, on behalf of the Division, because this is not how we conduct our business." You should have been spoken to, during the investigation. . . [End  Quote]

The state employee, on July 9th/10th(even at this time) entering week #2, the state still was NOT able to substantiate child abuse/neglect, not on any level. Again, this is documented,and on the record. 14 DAYS, the state agency kept two little healthy girls, who the state had visited/seen/examined and even made reference, in their own memorialize report lengthy(four pages) that the state agency CANNOT  substantiate child abuse by the mother, not even a neglect indication,nothing can be substantiated against custodial parent.

Stories shifting like quicksand amongst number of caseworkers, social workers and their own supervisors taking part in such as the facts shall prove at any reasonable jury level involving a little girl who suffered the most gruesome injuries since age of removal.

New Revelation,after revelation,there has been mis-truth, after mis-truth, perjury to a material fact,lengthy, to mis-characterizing and hindering such facts,on the child's condition for almost eight years, since the child was violated of her 4th amendment right to NOT be seized/detain on July 9th,10th and prior July 3rd,July 4th,5th,6th and every other day the state had the child without the authorization from a judicial; or a warrant to place the children in state custody.


-
Case law, in our sister courts, at  the actual FEDERAL level agree consistently when IMMUNITY from paying out damages, involving such lawsuits the differences between a state employee(caseworker) who took it upon herself or himself to seize a child, and place the child with someone other than such parent, taking a child into state custody in devoid of imminent danger, that such worker acting as a government official investigating "potential" abuse to a child or neglect  that judges have held numerous times,
holding that immunity from a civil rights money damages lawsuit against DCF, turns  not on the DCF employee's title or agency, but the "specific social worker/caseworkers, on the nature of the actual function that the person(caseworker assigned) was performing. Good luck to everyone suing as our founder astutely has done(timely) by deadline, and holding dcf ACCOUNTABLE.
#Smile ... when you're doing so and realize your potential when an un-caring "lawyer" in your state/county is not represent you. Remember, "YOU ARE CAPABLE..." Do not let anyone in life, tell you you're not.(click here)>>> E-HELP FORM,to begin your
same-day POWERFUL educational 1-on-1 on suing child protection agency worker by DEADLINE ... and call after implementing." 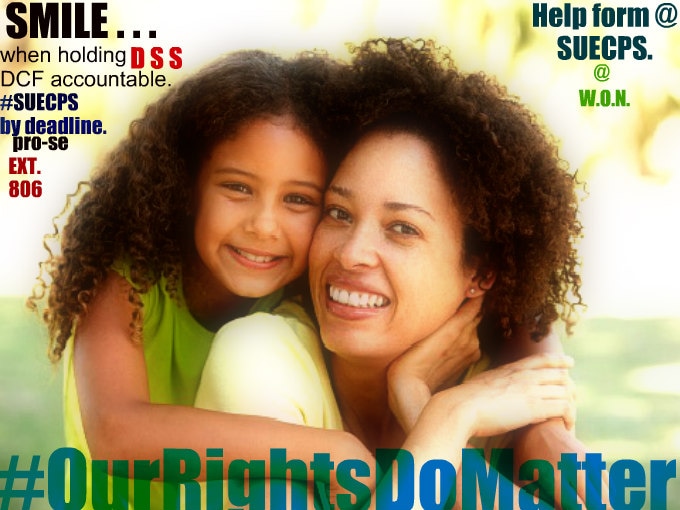